We Al-Noor Electronics are leading Manufacturers, Suppliers, Providers, Wholesalers, Traders, Dealers of Goat Weighing Scale. Weighing scales are a type of scale that is used to determine the weight or mass of an object. The word scales comes from the pair of scales or dishes in which the things to be measured are put, as well as the weights or masses against which they are to be weighed. Weight is measured on weighing scales and balances by the amount of force applied to the load cell. The result is then converted to mass and shown in various mass units. The outcome would be measured in Newtons if they didn't convert it to kilogrammes or pounds. Gravity causes scales to provide various findings.

Weighing scales disclose your weight status, which may be compared to the weight of individuals of similar height and structure to determine if you are underweight or overweight, as well as whether you are recuperating or worsening from a condition. Weighing your items also makes waste reduction simpler for the firm. A corporation may figure out where they are losing resources and goods by constantly weighing their product before packaging and shipping. Over time, this might save both the organisation and the client money. We Al-Noor Electronics are instrumental in offering Goat Weighing Scale in Mumbai, Navi Mumbai, Thane, and all over India. 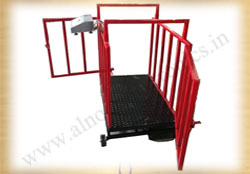