We Al-Noor Electronics are leading Manufacturers, Suppliers, Providers, Wholesalers, Traders, Dealers of Hanging Scale. Crane scales, sometimes known as hanging scales, function a little differently than regular scales. Rather than placing a weight on a weighing pan or a platform, the crane scale's hook is used to hang the load. The scale can be suspended from machines, hooks, and other devices. A hanging scale is a type of scale that is hung in the air by a cable or crane and may produce extremely accurate measurements. These scales are able to minimise errors that might arise with platform scales since they are not anchored to the ground. The top of these scales has a hook that may be used to suspend the scale from a robust structure.At the bottom of the scale, there is another hook. From the bottom hook, the item to be weighed is hanging. It measures and calculates the weight, which is shown on an electronic readout, using a load cell.

A hung weighing instrument used in difficult industrial situations is known as a hanging scale, sometimes known as a crane scale or suspension scale. Hanging scales are used to weigh things that are suspended in the air. A crane scale performs the same way, although it's more commonly used for heavy-duty weighing. It's little and simple to use. Unlike platform scales or other high capacity floor scales, hanging scales do not take much space at all. We provide a variety of hanging scales that are suitable for industrial, commercial, and agricultural trade, as well as sport and recreation. Our hanging scales are available in practically every weighing range (from 20 g to 10 t) and come with a shock-proof mechanism. You can weigh many items with our hanging scales, from small goods to large containers or material, anything that can be suspended – the hanging scales can act as another connector to your crane or a stable hanging connection – and then evaluate the weight while secondary moving the items if necessary. We Al-Noor Electronics are instrumental in offering Hanging Scale in Mumbai, Navi Mumbai, Thane, and all over India. 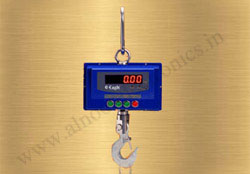