We Al-Noor Electronics are leading Manufacturers, Suppliers, Providers, Wholesalers, Traders, Dealers of LED Scrolling Board. LED Scrolling Boards are versatile true colour modules that may be adjusted to adopt concave, convex, or cylindrical shapes that fit in with the surroundings. An LED display is made up of a large number of LEDs that are tightly spaced. The diodes produce a picture on the display by adjusting the brightness of each LED. The concepts of additive colour mixing are employed to generate a brilliant colour picture, in which new colours are formed by combining light in various colours. A flat panel display with an array of light-emitting diodes as pixels is known as an LED display.LED displays are capable of providing general illumination in addition to visual display, as when used for stage lighting or other decorative purposes.

LED displays are used in a wide range of general illumination applications, including billboards, signs, and spotlights, as well as stadium, retail, and vehicle lighting.LEDs are flat panel displays with light emitting diodes that emit visible light when an electric current runs through them. Outdoors, LED displays may be found on billboards and retail signage. They can also be found on public transportation destination signs or as part of the transparent glass area. Lighting or general lighting, task lighting, or stage lighting may all be done with LED panels.A display and lighting technology used in almost every electrical and electronic product on the market, from a tiny on/off light to digital readouts, flashlights, traffic lights and perimeter lighting. We Al-Noor Electronics are instrumental in offering LED Scrolling Board in Mumbai, Navi Mumbai, Thane, and all over India. 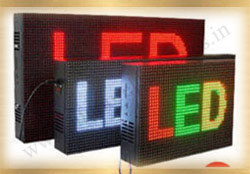