We Al-Noor Electronics are leading Manufacturers, Suppliers, Providers, Wholesalers, Traders, Dealers of Medical LED Board. LED treatment is a sort of photodynamic therapy in which the medicine is activated by a specific type of light. Light-emitting diode treatment is another name for it. The term "light emitting diode" refers to a device that emits light. In comparison to incandescent light bulbs, LED lighting products produce light up to 90% more effectively. A microchip receives an electrical signal, which ignites the small light sources known as LEDs, resulting in visible light. In the medical profession, LED equipment is a vital tool. LED technology increases surgical illumination, allowing surgeons to see more clearly during procedures.LED technology can also heal wounds quicker and even improve brain functionality for people with limited cognitive abilities.

When current passes through a light-emitting diode (LED), it produces light. Electrons recombine with electron holes in the semiconductor, producing energy in the form of photons. LED skin treatments frequently stimulate red and blue light. Experts think that red LED light affects fibroblasts, which are skin cells that play a role in the formation of collagen, a protein that makes up a substantial percentage of connective tissue and aids in the recovery of damaged skin. LED lights do not emit UV rays and are thus safe to use on the skin.LEDs have many advantages over incandescent light sources, including lower power consumption, longer lifetime, improved physical robustness, smaller size, and faster switching. We Al-Noor Electronics are instrumental in offering Medical LED Board in Mumbai, Navi Mumbai, Thane, and all over India. 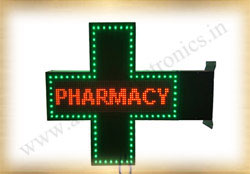