We Al-Noor Electronics are leading Manufacturers, Suppliers, Providers, Wholesalers, Traders, Dealers of Platform Scale. Platform scales are used in a variety of sectors because of their durable design and great capacity. They're frequently used in industry and corporate environments to weigh large goods like containers or pallets, or to count a large number of small components like screws, bolts, or mechanised parts. Scales determine how much anything weighs by measuring the amount of force that exists between the object being weighed and planet Earth. Although scales measure force, they also provide mass readings in kilogrammes, gram, pounds, and other units. The rack is the platform, while the pinion is the scale's pointer.

Work is scaled up and down on the platform. Hydraulic load cells operate similarly to pneumatic load cells, except instead of air, they employ a piston and pressurised liquid. When an object is put on the platform, the piston increases the pressure in the confined liquid by a factor that is proportionate to the weight. The weight of things loaded on a flat platform is measured using a platform scale. The platform's purpose is to communicate the object's weight to the internal measuring equipment and to sustain the object while it is being weighed. We Al-Noor Electronics are instrumental in offering Platform Scale in Mumbai, Navi Mumbai, Thane, and all over India. 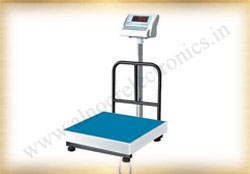